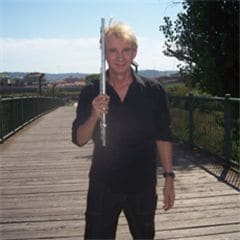 Geoff Warren is a graduate from London University who studied flute with Derek Honner of the Royal Academy of Music.

He started his jazz career as flautist/saxophonist in the ranks of Graham Collier with whom he played at major music festivals in Europe and Asia, working alongside famous musicians on the British jazz scene such as John Surman, Kenny Wheeler, Harry Beckett and John Marshall. In 2012 he conducted the BBC Big Band in their tribute to Collier at the London Jazz Festival

As leader of his own quartet he has made numerous recordings for BBC national radio, and he toured in Hungary (1984) and Yugoslavia (1985) for the British Council. In 1983 the Arts Council of Great Britain, commissioned him to write a composition for this quartet.

His involvement in ethno-jazz has seen Geoff on tour and making records with internationally acclaimed musicians, including tablas player, Badal Roy, (historic sideman of Miles Davis,) Tartar guitarist (Tartar,) Enver Izmailov, and Basque guitarist Balen Lopez De Munain. In 2008 Warren performed his “Concerto for Flute, Tablas and Orchestra”, with tablas player Arup Kanti Das at “The Orchestra of the Teatro Marrucino” of Chieti.

Particularly busy on the Italian jazz scene he has worked with many Italian jazz names. His latest CD, “The Quartet Album” was recorded with his Italian group, and described by jazz writer Duncan Heining as “an unusually attractive, satisfying blend of virtuoso playing and excellent writing. “

Active throughout his career in the teaching of jazz flute his work has been the subject of articles in flute magazines Falaut in Italy, and Pan in Great Britain.

From 1985 to 1993 he was a professor on the jazz course at the Royal Academy of Music in London. Geoff has presented masterclasses in jazz flute at conservatories and flute conventions throughout Europe. Every year he holds a Jazz Flute Summer School in Abruzzo, Italy, which has attracted participants from all over Europe. and in 2014 he set up his own “Accademia di Flauto Jazz “ in Verona.

In 2011 Geoff Warren became a Yamaha Europe Artist and in 2012 he was appointed Principal Examiner of the Diploma Programme - Music Creating Component for the International Baccalaureate Organisation.

He plays the Yamaha flute YFL777