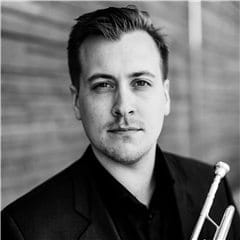 Gustav Melander is regarded as one of Europe’s most talented young trumpet players. Having studied with Bo Nilsson and Prof. Håkan Hardenberger at the Malmö Academy of Music, since graduating, Gustav has gone on to become one of the most in demand players.

Passionate about education, Melander has a number of students and has been a trumpet teacher at the Malmö Academy of Music since 2015.

Speaking about his Yamaha trumpets Melander stated: ‘It’s great to be joining all the other fantastic musicians in the Yamaha family. The sensation of easy playing and flexibility that the Yamaha trumpets offer help me to play at my very best.’