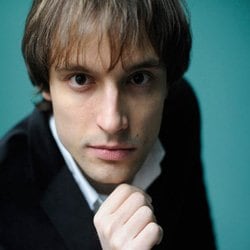 At the very young age of eight, Ilya Rashkovskiy made his solo debut with the Irkutsk Chamber Orchestra. From 1993 to 2000 he received his musical education in Novosibirsk with professor M. Lebenzon. From 2000 to 2009 he studied at the Musikhochschule Hannover with professor V. Krainev and at the École Normale Supérieure Alfred Cortot in Paris with professor M. Rybicki.

Passionate about orchestra conducting and composition, he is following the teachings of Dominique Rouits and Michel Merlet.

In 2014, he collaborated with violinist Park Ji-Yoon and recorded a CD featuring sonatas by Hahn, Faure, Shinuh Lee (DUX). A second album was recorded with pianist Giuseppe Andaloro and cellists Giovanni Sollima and Monika Leskovar, presenting Andaloro's transcription of Stravinsky's Rite of Spring for two pianos and two cellos, as well as works by Ravel and Lutoslawsky (Alpha Omega Music Hong Kong).