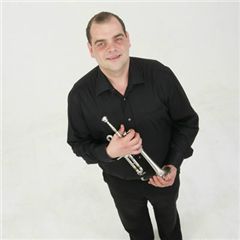 Steven Devolder started his musical education with the age of 8 at the music academy of Harelbeke.

He studied trumpet at the conservatories of Rijsel, Gent and Maastricht with Benny Wiame. Also he studied with the well known Pierre Thibaud, Donald Green (Los Angeles Philharmonic) and Urban Agnas (Stockholm Chamber Brass). His versatilness is his trump as he is at home at all kind of trumpets, cornets, flugelhorns.

He won the 1st price in the Slaskim Competition (Poland) and also the Jean Darlier Trumpet Contest.

From 1998 to 2005 he was solo trumpet player at the Beethoven Academy. From 2005 on Steven is playing in the Orchestra Muntschouwburg in Brussel. Also he teaches at the conservatory of Gent.

Steven is active as clinician all over the world and also an often requested soloist in the HaFaBra World. You can hear him on his Solo Cd with the Metropole Brass Band on Soprano Cornet.

In his free time he likes to play in the latin Bigband Mucho Gusto.